Over the weekend following Thanksgiving, the mid-Atlantic region is treated to Chessiecon, a science fiction/fantasy con presented by the Thanksgiving Science Fictions Society in Timonium, Maryland.

Sessions on many aspects of SF/F are offered across as many as 12 rooms–art, music, gaming, dance, spiritual, videos, and literature.

But best of all, one of my favorite YA authors, Tamora Pierce, was the Guest of Honor. 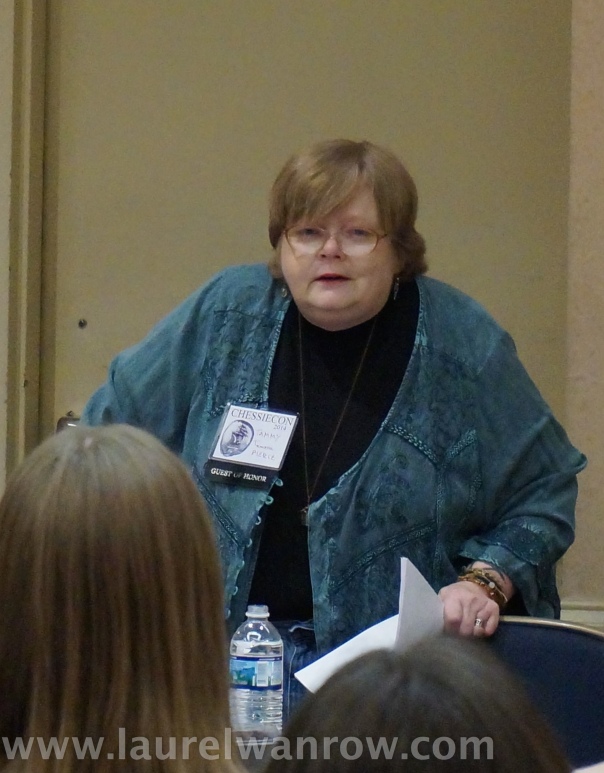 Tamora has attended many of the Darkover (predecessor of Chessiecon) cons since she was Guest of Honor in 2005. The young adult author read from one of the two novels she currently has in progress. The Gift of Power goes back in time from her Wild Magic Books to trace the antics of young Arram Draper as he comes into his wizard powers, before he became known as Numair.

Tamora was asked a some great questions. A few that intrigued me:

What drives the pace of your work?

TP: Quiet. Daily readings with Bruce ( I *think* this is a crit partner). Deadlines. An exciting part of the story. Her health and emotion of the house. Currently, the kittens dropped in her airlock. It does depend on the story–a current WIP about Alana has coem easily after the idea came along.

Where do your ideas come from?

TP: I read a lot, and not just fantasy. I’m reading more science fiction these days. Thrillers, and YA when I can get my hands on it. I’m a news addict–both BBC and American. I get a lot of ideas from non-fiction reading.

You’ve had Alana for 30 years. What’s it like living with these characters?

TP: I don’t know. This is what my life is like.

I liked this last answer a lot. I  believe it’s hard for writers to think of their characters as anything but real. And speaking of ‘real people’, I  attended the Diversity in SF/F panel.

With Carl Cipra moderating, the panel of D.H. Aire, Heather Rose Jones, Timothy Liebe, and Mary Fan urged writers not to force awkward inclusion, but to think into the characters’ backgrounds to determine who they really are.

The YA Fiction panel addressed a little of the history of the YA genre and how we’ve gotten to today’s offerings.

Or there is always next year:

Have a great weekend!

I had a fun evening attending the signing of Darkbeast, a middle grade book penned by a fellow Washington Romance Writer.

One of the neat things about belonging to local writing chapters in RWA is watching and learning from the other writers. The writing process is so unique for each person and each story. For example, Morgan Keyes’ new middle grade book started as a short story for an anthology on children and animals. She would have had the animal be a griffin, if another author hadn’t chosen it already, and the next three animals she proposed. Finally she settled on a raven.

That’s Caw pictured on the cover, and boy does he have personality. I loved Morgan’s reading of the first chapter, including the voice of Caw who speaks within the heroine Keara’s head. Morgan sounded so comfortable and I thought, Wow, I hope I can be this collected, and do different voices for my characters in a public reading.

I have to say, I love the question sessions the best. You always find out the best tidbits. Morgan gave us a little history on the development of Keara’s world—originally based on Celtic communities—and some of the interesting challenges in working with, of all things, the symbolism of numbers in the story. 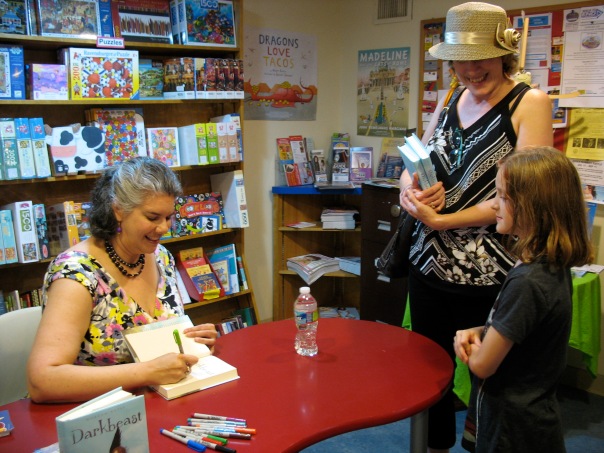 Of course, I got my copy signed and am looking forward to diving into Darkbeast’s world—especially since another favorite author of mine also liked it: Tamora Pierce! Check out her quote on Morgan’s website and learn what your darkbeast is. http://www.morgankeyes.com

Posted in Favorite Authors, Middle Grade Novels, What I read

With fellow fantasy writer Marta Blieze, I attended the DarkoverCon in Timonium, Maryland over Thanksgiving Day weekend. Multiple tracks of science fiction and fantasy programming kept us busy, but I especially enjoyed the Steampunk track and a chance to dress up.

The small con offered many chances to mingle with fantasy authors, including a favorite YA author, Tamora Pierce.

Posted in Conferences, Favorite Authors, What I read, YA Novels